Trending Pupil Size and Reactivity in the

The clinical neurological exam is a key component in providing care to patients with a wide variety of illnesses and injuries (19, 24, 33). Clinicians have been assessing the pupils of patients with suspected or known brain injury or impaired consciousness for centuries. Today, clinicians routinely evaluate pupils as part of the neurological exam and monitoring of all critically ill patients, including those with primary neurological injury as well as those at risk of secondary neurologic insults (3, 24, 30, 33, 35).

Pupillary information is used as an indicator of neurologic deterioration and as an indication for possible clinical intervention. It has been shown that, depending on pupillary status, neurosurgeons triage patients into either conservative therapy or surgical evacuation of mass lesions(33). Patients who undergo prompt intervention, such as surgery or hyperosmolar therapy, after a new finding of pupil abnormality have a better chance of recovery (15).

During pupillary examination, the functional status of two cranial nerves (CN) – the optic nerve (CN II) and the oculomotor nerve (CN III) – is assessed. This evaluation is important because loss of cranial nerve reflexes may signal increased intracranial pressure (ICP) and/or an increased risk of brain herniation (2,33). Scientific literature provides much evidence that alterations of the pupillary light reflex, size of the pupil, or anisocoria (unequal pupils), are correlated with patient outcome (3,11,15,44). Along with other clinical information such as age, mechanism of injury and Glasgow Coma Score (GCS), the pupillary light reflex is a useful prognostic indicator of survival, functional recovery and long term outcome (3,15).

Traditionally, pupil assessment has been performed in a subjective manner, using a penlight or flashlight to manually evaluate pupil reactivity, and a pupil gauge to estimate pupil size. Common terminology employed in the clinical literature to describe the pupillary light reflex and pupil size includes “fixed” or “dilated” pupils, as well as “brisk”, “sluggish” and “non-reactive” pupils. These subjective terms are applied without a standardized clinical definition and yield a pronounced level of inter-examiner variability and error (13,30,34).

Manual pupillary assessment is subject to compounded sources of inaccuracies and inconsistencies and can result in as much as 39% inter-examiner variability (3,13,19,29,30,33,34). A variety of factors can affect the reliability of the visual assessment of the pupil and increase inter-examiner disagreement. These factors may include poor lighting conditions in the patient’s room, the examiner’s visual acuity, and the strength, distance and orientation of the light stimulus with respect to the patient’s eye (2,26). A 2016 study revealed that critical care and neurosurgical nurses consistently underestimated pupil size, were unable to identify anisocoria, and incorrectly assessed pupil reactivity (19).

The NPi®-200 Pupillometer Is Reliable and Eliminates Subjectivity

FDA approved and CE marked for use in both adult and pediatric populations, the NeurOptics® NPi®-200 Pupillometer is a noninvasive, handheld optical scanner that provides reliable and objective measurements of pupillary size, symmetry, and reactivity. The device stimulates pupil constriction with a gentle flash of light as the infrared camera takes 90 images in a 3 second period, measuring 8 different parameters that comprise the entire pupillary light reflex. A disposable SmartGuard®, uniquely coded for each patient, captures and stores 168 paired pupil assessments for trending and review throughout the patient’s admission. As part of the entire NPi®-200 Pupillometer System, the optional barcode scanner and SmartGuard® Reader allow automated patient identification entry and upload of data to the electronic medical record.

Quantifying pupil reactivity on a numeric scale (from 0 to 4.9), the Neurological Pupil index™ (NPi®) allows rigorous interpretation and classification of the pupil response. The Pupillometer and the NPi® Pupil Reactivity Assessment Scale provide objectivity in measurement by comparing the patient’s pupillary light reflex to normative data in the NPi model. By automatically deriving whether the pupillary light reflex falls within the normal range (> 3.0 or “brisk”), the abnormal range (< 3.0 or “sluggish”) or is “atypical”, “immeasurable” or “non-reactive” (0), the NPi-200 Pupillometer provides a reliable and accurate way to quantify and trend the pupillary light response, offering increased confidence in the neurological assessment (3,6,11,13,17,30,33,34).

Recognized as an important tool in the ICU, automated pupillometry technology is becoming increasingly incorporated as a standard of care in clinical practice and is being adopted in hospitals all over the world (2,48).

In the arena of Neurocritical Care, use of the NPi-200 Pupillometer has emerged as an objective means of assessing pupillary reactivity across a broad spectrum of neurological disease including stroke, traumatic brain injury (TBI), cerebral edema, tumors, herniation syndromes, and sports or war injuries (4,12). Recent studies have shown relationships between NPi and cerebral edema, as well as midline shift (20,36,37). Numerous studies have shown that an abnormal NPi (< 3.0) correlates with higher patient ICP, early neurologic deterioration, and delayed cerebral ischemia (1,3,4,11,18,28,29).

Automated Pupillometer technology is showing emerging value as a prognostic tool, with predictive temporal properties that could allow practitioners to anticipate neurological injury, as well as recovery (5). A recent study looking at ICP in patients with TBI showed that sustained abnormal NPi was associated with a more complicated ICP course and worse outcome at 6 months (18). Automated pupillometry is also proving beneficial to patients without a primary neurologic diagnosis – those with potential for neurologic complications from such conditions as cardiac arrest, diabetic ketoacidosis (DKA), pancreatitis, sepsis, pulmonary problems, deep vein thrombosis; and procedures such as mechanical ventilation, cardiac surgery, and extracorporeal membrane oxygenation (ECMO). Several studies have highlighted the prognostic value of pupillometry in cardiac arrest patients. In an earlier study (2012), the presence of the pupillary light reflexes obtained in serial measurements during resuscitation was associated with early survival and a favorable neurological status in the recovery period (7). In a more recent study, quantitative NPi had excellent ability to predict an unfavorable outcome from day 1 after cardiac arrest, with no false positives and significantly higher specificity than standard manual pupillary examination (32). A similarly designed study concluded that NPi and pupillary light reflex measurements performed as early as 6 hours post cardiac arrest predicted poor outcome, independent of pupil size (41).

The creation of databases and ongoing research are providing a greater understanding of expected distributions for normative pupillometry values upon which future studies and clinical practice can build (23,35). Burgeoning areas of research and publication include the use of automated pupillometry in pediatric populations (8,10,14,39), athletes (16) and in evaluation of pharmacodynamic activity of drugs, such as opioids and anesthetic agents (27,31, 40, 42).

In summary, pupil evaluation is a critical component in the assessment and management of critically ill patients with direct neuronal injury or potential neurologic sequela. Manual pupil measurements are characterized by high inter-examiner variability and error. As an optimized method of neurological assessment, the NPi-200 Pupillometer has the potential to improve detection of conditions leading to neurologic deterioration, serving as an early indicator of worsening intracranial pathology and clinical deterioration (4,37,38). Use of the Pupillometer and the Neurological Pupil index (NPi®) Pupil Reactivity Assessment Scale is proving beneficial in guiding treatment decisions for early therapeutic intervention, in evaluating the effects of clinical interventions, and in providing important prognostic information (5,19,25,26,36).

Bibliography and Links to Abstracts

Why measure the pupils of a critically ill or injured patient?

Frequent pupil evaluation is part of the protocol for care of the critically injured or ill patient. The pupillary light reflex (PLR) and pupil size have traditionally been used as a clinical parameter and as a prognostic indicator. The Brain Trauma Foundation and the American Association of Neurological Surgeons recommends that pupillary light reflex for each eye should be used as a prognostic parameter and that the duration of pupillary dilation and fixation should be documented. In addition to use on patients with neuronal injury, the pupillometer can facilitate measurement of pupil dynamics on patients who are under the effect of recreational drugs or medications prescribed for medical treatment – such as analgesics, sedatives, and anesthetic agents. Certain drugs or medications have an effect on pupil size, often making manual assessment challenging and potentially inaccurate.

How is this assessment currently done?

Currently, this assessment is manually performed by clinicians using a penlight/flashlight and pupil gauge (Haab scale(citation)). Terms such as “brisk”, “sluggish”, “minimally reactive” or “non reactive” are used to describe reactivity resulting in a very subjective and qualitative measurement. 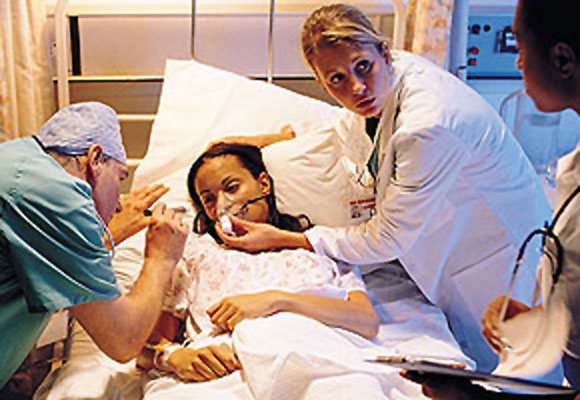 The American Association of Critical-Care Nurses (AACN) Procedure Manual for High Acuity, Progressive and Critical Care features a new section on pupillometry, noting that the pupillary examination is a key assessment performed during neurological examinations and guiding nurses on the use of automated pupillometers.

The new edition of the American Association of Neuroscience Nurses (AANN) Core Curriculum for Neuroscience Nursing includes a new section on automated pupillary assessment, which states that use of a pupillometer removes measurement subjectivity and provides a way to track and trend pupillary reactivity in a consistent, objective, and quantifiable way.

Automated pupil assessments have been shown to decrease nursing workload associated with time spent per assessment every 1-2 hours (29). As critical care nursing leadership looks to improve efficiency in critical care unit staffing, Pupillometers at each bedside can assist in that effort. Click on the line below:

A paired assessment with the pupillometer takes a clinician about 15 seconds. Manual pupil assessment can be confounded by several issues: Visual acuity of the examiner, dark eyes or small pupils of the patient, ambient light conditions and the subjectivity and skill/experience level of the examiner. As a result, in some patients, a clinician will often pass the penlight multiple times to try and confirm what he/she sees and a manual assessment can take even more time. In other cases, if the clinician is not sure, or if there is a suspected pupil change, another opinion might be sought. This involves an additional person and several minutes more of time. As a single measurement, these differences might not seem meaningful but given the frequency of pupil exams, these differences are significant over time.

Charting and Inputting Data
Some clinicians will complete the exam and immediately record the pupil measurement data into the terminal, while others will complete the pupil exam, continue with necessary patient care, and then later go to the terminal, log in, input the data and log out. Nurses at a high volume neuro ICU were recently timed and, on average, these charting and data entry steps took about one minute. Automatic data upload will eliminate the need to manually chart and input data.

Utilization of pupillometry has been shown to decrease nursing workload and is associated with time savings compared to manual assessments (29).

(29) See bibliography at top of page.

NeurOptics will work with the critical care leadership to identify the timing and framework of clinical staff education required that will be conducted by NeurOptics personnel. NeurOptics estimates that all critical care unit staff working during the initial training period will receive one-on-one inservice education to ensure each clinician is fully trained. To reinforce the training and operation skills, supplementary training scheduled four-to-six weeks following the initial training is recommended, as well as inclusion of pupillometry training in unit Skills Days. Physicians in the critical care unit, as well as midlevel providers, will need to be trained on use of the device and interpretation of the data. NeurOptics has local representatives that can assist, as well as a network of trained Clinical Specialists.

It is important to establish unit protocols and guidelines for use of the Pupillometer. The protocol/guideline should include baseline pupillometry readings on appropriate patients upon admission to the critical care unit along with guidelines for ongoing measurements for trending of data. Hospital approved guidelines are available from your NeurOptics’ representative for use when developing protocols/guidelines.

In order to achieve the benefits previously identified, the automated pupillometry program must have intensive collaboration of a multidisciplinary team of professionals including nurses, providers, nursing leadership, Biomedical Engineering, Information Technology, and Supply Chain Management.